Although not technically in the Welcombe Hills nature reserve itself the Welcombe Hotel needs a mention because it has been so intrinsically linked to the area for so long. The lost village of Welcombe is probably within it’s grounds. You can book rooms here

The Welcombe Hotel occupies a 19th century former country mansion house near Stratford upon Avon, which was previously known as Welcombe House.

In about 1835 Mark Philips a wealthy Manchester Cotton Manufacturer bought the estate and in about 1866 commissioned Thomas Newby to build a new mansion house in a Neo Jacobean style to designs by architect Henry Clutton. Philips was High Sheriff in 1851. On his death his brother Robert Needham Philips inherited the estate of almost 14 km2 (3,400 acres). On Robert’s death in 1890 his daughter Caroline who married Sir George Otto Trevelyan inherited the property. Their son George Macauley Trevelyan was born at Welcombe House in 1876.

Trevelyan died in 1928. It passed through several owners, including Sir Archibald Flower, founder of Flowers Brewery, whose donation financed the original Shakespeare Memorial Theatre, now the Royal Shakespeare Company, in Stratford-upon-Avon. The house was sold to the London, Midland and Scottish Railway and was converted to a hotel. It then played a role in the history of the Stratford upon Avon & Midland Junction Railway (SMJR).

This was a minor railway company of 67 miles which touched the counties of Bedfordshire, Northamptonshire, Oxfordshire and Warwickshire. It was originally planned the line would carry huge iron-ore deposits, creating a shorter route from Northamptonshire to South Wales. In an attempt to survive, the line styled itself the “The Shakespeare Route” trying to grab a slice of the Stratford tourist trade.

It was formed by the amalgamation of four railways on 1st January 1909 and consisted of a main line from Blisworth to Broom, (between Evesham and Redditch on the Midland), with two branches: one from Towcester to Cockley Brake Junction on the LNWR, another to Olney on the Midland’s Northampton branch. Soon after the Great Central London Extension was built in 1899, through passenger coaches were instituted between London Marylebone and Stratford. The line was single track throughout apart from passing loops: the countryside was undulating, and there were frequent changes of gradient and sharp curves, making it difficult to work for train crews. It was because of that that the line had been dubbed the ‘Slow Mouldy and Jolty’ Railway by travellers.

By 1911 the line was showing a reasonable profit. Lias limestone was conveyed from the Ettington Lime Works; but from the early 20th century it became important as a through route for freight of all kinds between the West of England and London. One such freight working was the express banana train between Avonmouth Dock and St Pancras.

On 1 January 1923 the SMJR was taken over by the London, Midland and Scottish Railway (LMS) and became an important asset to them, since it provided a direct route avoiding Birmingham, between the western line hitherto owned by the Midland Railway and the main line south of Bedford. It was extensively used by excursion traffic between the two world wars. There was also a “race special” once a year to Towcester from London. Passenger services generally on the SMJR were sparse, with often just three or four trains a day.

For some months in 1932 experiments were carried out on the SMJR with a Ro-Railer – a bus converted to run on rails. This was built by Cravens to a design of the LMS. It had central doors, one on each side, buffers fitted to the front, ‘LMS’ in large letters on the side in the same style as on a locomotive tender, and rail wheels, inside the road wheels, which could be lowered and raised. It was tested between the Welcombe Hotel and Blisworth, which is on the main line between Euston and Birmingham. The intention was to stimulate use of the hotel, corner a share of the Stratford tourist traffic, and exploit the under-used railway line. Sadly this interesting experiment failed and the bus was disposed of after a few months.

The hotel is no longer owned by the railway.

Credit for this article to Heritage Locations 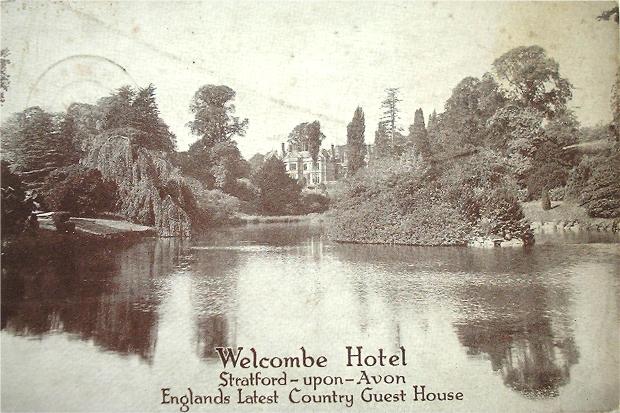 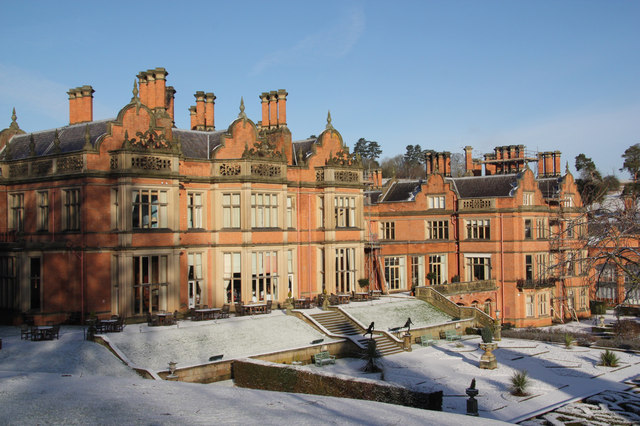