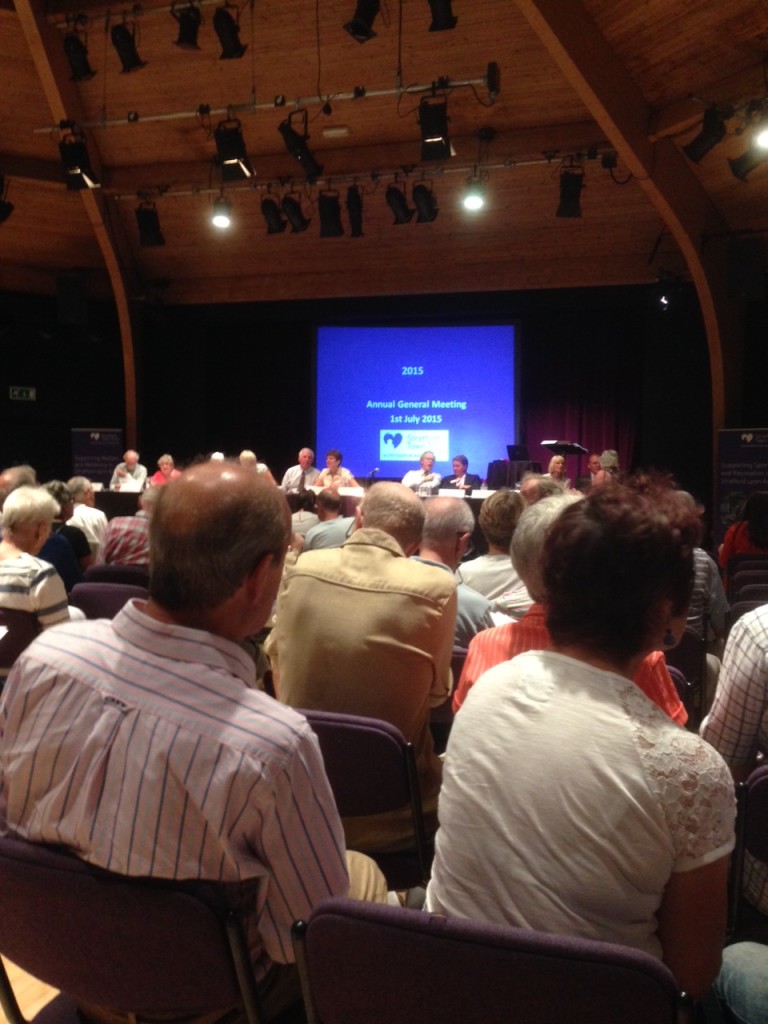 And so to the long awaited AGM held at the Arts House. Perhaps it was unfortunate that this was held on the hottest night for a decade but this was only ever going to be a feisty meeting.

The Chairman sadly didn’t have the local support nor the force of personality required to control this riled up crowd. One could have some sympathy for the man being newly appointed and then dropped into the middle of this row – although he might have questioned why his two predecessors (both well liked and very much respected in the town) had quit as it might have given him a idea of what he was taking on.

We sat politely as a lawyer spent 20 minutes telling us, at a soul crushing snail pace delivery, about the responsibilities of trustees – an item that could have taken 3 minutes and was really just thinly veiled justification of why the Trustees wanted to plonk a housing estate on our sacred fields – without ever mentioning Rowley Fields.  People all around me were sighing in an overt manner, clearly getting bored.

Next up was the Chief Exec who told us how the money was spent. The crowd fidgeted in their seats.  We know the Trust gives out money. We read the newsletters and we see it in the Herald.  The value of the Trust has never been in question. It’s a magnificent glorious organisation, a portfolio of assets built up over hundreds of years from the townsfolk of the past to help the townsfolk of the future. For those of us who couldn’t understand the fairly simple concept we were shown a kids picture pulled off the internet which explained it as an apple tree that if you looked after it then year after year it yields apples – ie. don’t sell your assets.  Really?

For the audience there was only really one topic on most of their minds and it was skirted around until it could be avoided no longer.  Eventually one of the Trustees who was in charge of the Rowley Fields project put on a presentation detailing the back story which was so devoid of passion and energy that it was a struggle to stay conscious. Like many this was the point at which it dawned on me that we were being filibustered. They were going to drone on for so long in the heat that by the time we got to questions at the end of the 2.5 hour session we would have lost the will to live.  The Rowley Fields presentation ended without applause or any sort of recognition and we waited in silence for the next segment, the accounts (to be presented by the third chartered accountant of the evening). Then someone snapped, an ex Trustee stood up and suggested that the presentation on Rowley Fields wasn’t entirely accurate – a slanging match ensued.  At that point the meeting fell apart.  The Chairman lost control and didn’t ever really regain it.  The company lawyer sitting next to him on the stage whispering in his ear only added to the sense that the whole group was under siege and that it was us versus them.  The Chief Exec adopted a rictus smile which, although an understandable defence mechanism in front of 200 hostile people, seemed to just infuriate things.  A lady in the audience asked for minutes of internal Trust meetings and was told this wasn’t possible.  Then the lawyer said it would be possible but much of the info would be redacted due to sensitive information (I still don’t know for sure if we can see minutes).  For the next hour the floor would lob up a question, the Trustees batting them away, much of it legal speak or fudged to get out of answering. The mantra that raising money for the town trumps everything was continually trotted out. Some of the trustees on the stage were looking awkward, others bored. The gulf between members and Trustees widened and I think relations are probably worse than when we started 3 hours before. Tim Bailey concluded with a brilliant erudite and concise presentation about what Rowley Fields meant to us.

The relationship between members and the trustees appear to be wholly broken.  A touch of humility might have started to heal the wounds but this was entirely absent.  Instead we had a stage run by lawyers and accountants who seemed to be humouring us like slightly errant children. To keep it a bit less ‘arrogant professional’ in tone and to prove all the Trustees were united occasionally one of the non accountant/lawyer  Trustees was allowed to read from a pre prepared document but you could see where the power resides within the organisation. It makes you wonder if behind closed doors if this dynamic is at play.

The trouble is that we are not small town hicks.  Stratford is packed to the gunnels with bright articulate educated passionate people who don’t like being patronised.  Parking the technical line about primary revenue raising objectives for one second, the simple fact is that The Trust tried to build on sacred land – land that just simply isn’t theirs to sell.  The Town told them where to get off.  They should apologise and take steps to protect it forever instead of trying to justify it and being slippery about their long term intentions. Everyone understands that the Trustees are decent people doing a job for free but amongst a certain group of them there is a palpable sense that we (townsfolk) are the enemy, that we thwarted them.  There is a sense (and I don’t know if this is true) that given half a chance they will have another go, not only because they want the money but because they want to win.  This is the nub of the problem. We don’t trust them.

This is a 800 year old charity that gives 1 million quid away per year to the town. How can you even begin to have this level of hostility from the town that you bestow so much upon? Something clearly isn’t right. As someone who hadn’t ever paid too much attention to the Trust until last year nor never been to an AGM my initial reaction is that the culture of the organisation seems to be secretive and without sounding dramatic, somewhat sinister.  There were at least 3 people in the room last night that were in High court proceedings with the Trust but who were forbidden to talk about it. This is a charity!

I came away from the meeting more troubled than when I went in. I thought that this could be an opportunity to fix things but the chaotic way it was run, the patronising tone and the feeling that we were an annoyance has only really inflamed the situation.  I wonder what will happen next?

The Mystery of “The Swimming Pool”
Scroll to top