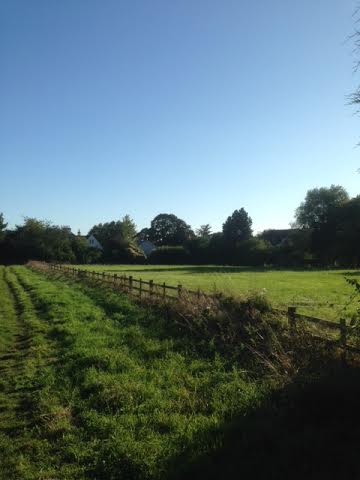 News comes to me of a threat to The Welcombe Hills from an unlikely source, namely The Town Trust. An organisation entrusted with owning certain town assets (include a large swathe of the Hills) and using them to generate income for various local charities and good causes.  It’s hard to criticise an organisation that is set up to do good things but if you’ve ever come up against them or their henchmen it can be a bruising episode. For years we rented a plot of land from them and when the price went up tenfold their agents (not a friendly local firm, but a hard-nosed brummie outfit) said that it was likely, quote, ‘to be rented by a rich bloke who would tarmac it over to park his car collection on.’  They intimated they knew someone who would rent the land and do this.  We didn’t want a rich blokes car collection on the side of our garden and settled in the end on a higher rental but far less than their initial demand. They were dealing with a householder about a few feet of garden space, not Donald Trump and the modest increase we eventually agreed could have been concluded with good grace and without the heavy duty arm twisting at all. People in the town are divided, I guess if you’re on the receiving end of a grant it’s a pleasant experience, many who have dealt with them in the commercial arena feel like I do, namely heavy handed and focussed on generating cash for good causes above all else. I haven’t read their core mission statement but I doubt there’s a directive that insists they deal with their fellow town folk in a kind hearted manner.  But, hey, life’s cruel, I’m a grown up and nobody owes you anything. You can check them out here.

And so to the Rowley Fields episode that is causing all the fuss.  It would appear that The Trust has gone full tilt into speculative property development. They bought 7 Benson Road for a price over the asking amount to ensure they got it. The plan it seems (if they get the necessary planning permissions) is to knock down the house to create access to a Trust owned field behind the house (see pic below) which is in a corner of the access to The Welcombe Hills. This small patch of land (along with the fields that form the lower part of the hills)  is called Rowley Fields – which rather than just sit there looking pretty would be perfect to shove lots of red brick boxy houses on and for everyone concerned to make a quick killing. 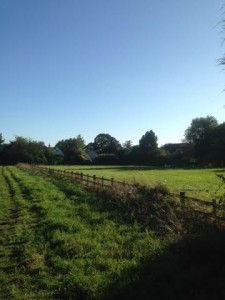 At this point it’s hard to not sound like a Nimby.  I mean why shouldn’t we crow bar a house into every part of the Town? The prices here are nuts and people have the right to live here.  But there’s something about this part of town.  It’s special to the people who live here.  It’s not just a field on the outskirts of town that’s full of barley or cows that looks pretty.  Almost without exception the people who live here actually use the fields.  It’s a place of happiness, positive vibes come from here, which sounds corny until you walk round it and you’ll see what I mean.  It’s not farmland, it’s people land.  We walk our dogs almost every day up there and there’s a cheery hello from everyone you meet.  Aside from the dog people there are runners, walkers and often tourists who are walking to the monument behind the hotel. Last week I bumped into two old ladies who were looking for Shakespeares Birthplace! 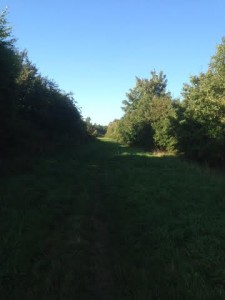 But none of this is an issue for the developers and The Trust with their charitable revenue generation.  And this is the worst bit.  Because you can’t put into words what the hills means to us without sounding like a Nimby. You can say it’s about walking and talking to strangers and breathing clean air and knowing there’s this place that’s safe from development but that doesn’t mean much to you unless you are from this part of town. The heartbreaking element of this is that you expect the Trust, an ancient Stratford society, to instinctively understand what this place means to us and clearly it doesn’t if it’s speculating on houses and little plots on the edge of The Welcombe Hills. It’s as if generating charitable income for the town actually trumps the people of the town. 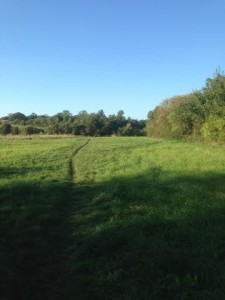 People say it’s only a little corner of the fields.  But it never ends like that.  We know the story, developers develop. They coax their tiny thin wedge in and take a sledge hammer to it.  They build.  As I mentioned The Trust own the fields as you enter the main part of the Hills and once they’ve got a taste for it you can bet your bottom dollar that their henchmen, hangers-on and developers will be in their ear dripping honey and trying to get more and more. The Trustees change and rotate but the relentless chip chip chip from people trying to make money from this land is never going to stop unless it’s stopped dead now.  That little corner is never going to be enough – we know it and they know it.  So it’s a fight for the hills, a little corner of England that we want to remain green and pleasant.

By even admitting that they’ve thought of building on the land has somehow sullied it.  It makes us all nervous. On the Hills themselves it’s always the talk du jour.  It makes that little haven we all deeply cherish no longer quite perfect because we know the people who are called a “Trust”, actually can’t be trusted.

Here’s an interesting article in The Stratford Herald about the issue.

Spring on the hills