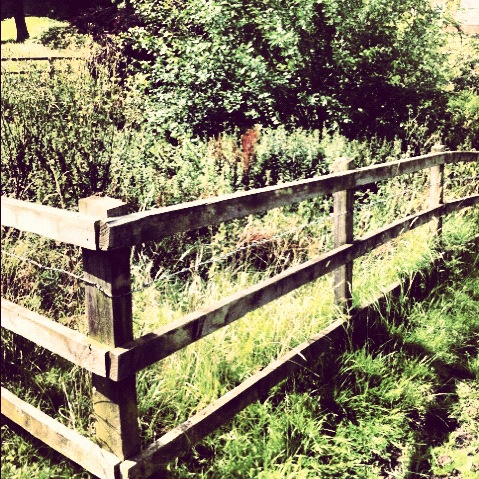 As you walk from the top of Maidenhead Road, straight North through the top entrance to the field and up to the Tower you must bear immediately left.  Walk briefly across the tarmac road and then through a gate which is part of the public footpath.  Keep walking for about five minutes (in an easterly direction) and on your right the field will open up into Clopton Park.  Ahead of you through the trees you’ll be able to see Clopton House which is now a collection of modern apartments. From the footpath you can head off right into the lower field and in the middle there is a large square clump of trees which is where you’ll find The Swimming Pool.  From here if you look directly east over towards the House you’ll see a fenced off square which connects to the fence of the private gardens of the house.

In this fenced off area is Margaret’s Well.  This well is named after the beautiful Margaret Clopton who was a daughter of the family who’s house now bears the name.  Except things didn’t end well for Margaret who committed suicide sometime around 1580 after being abandoned by her lover.

The vaulted well has been inaccessible for many years because the surrounding ground is so boggy so I’m afraid to say it’s not the most exciting thing to see.

Interestingly though there is much conjecture that the story of Margaret may have been the influence of the story of Ophelia written by William Shakespeare around 1590. even though he was in London by this time it’s likely that he would have kept up with new of things back home and Shakespeare and it is recorded the William did know the Clopton Family.